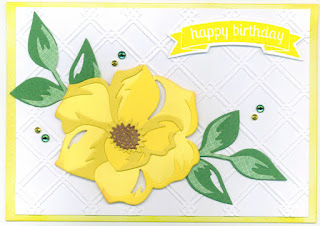 A bright birthday card for a friend who loves yellow. This gave me the chance to use another Sizzix layered flower die called Winter Flower. As it was the first time it was a bit tricky trying to work out the different layers but I got there in the end. In addition to the dies I used in this card it comes with dies for a layered pine cone, some berries and some fir style leaves.

The background embossing is a Crafters Companion Beatrix Potter folder and the flower was raised on foam pads. The banner sentiment is by Clearly Besotted stamped with Impress lemon yellow. I also used the yellow ink to add a border to the white card blank. Some tiny gems finished off the card. 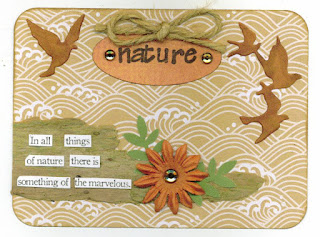 Some bits on my desk and a strip of peeling bark from my garden were what prompted me to make this pocket card. The base patterned card was left over from this project and the birds were the waste from this coloured with an alcohol marker. The bark is the small jagged piece under the text and the flower. I played around with the elements and added some punched leaves, a paper flower, some gems and a hemp bow. I am loving putting together these little cards - it reminds me of the joy of making ATCs which I haven't made for a few years now.
Posted by Scrapmate at 07:00 No comments: 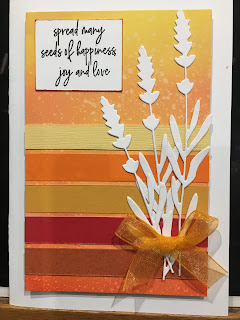 Trying to cling to the last remnants of summer I made an ombré background using hot colours of Distress Oxide - fossilized amber, spiced marmalade, crackling campfire and candied apple. I sprayed the panel with water and dabbed off the excess. I then added some strips of card in toning colours with a small gap in between. The lavender die cuts are from a Sizzix set called spring stems and I added an organza bow to tie them together. The sentiment is from a sunflower stamp set edged with crackling campfire. The completed panel was raised onto foam and mounted onto a white card blank. 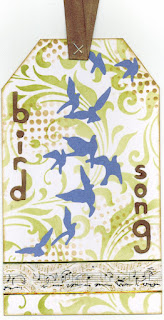 Stencils, washi tape and peel-offs oh my! This month's theme is Birds with blue, green and brown colours and I managed to use some long neglected supplies - these days even using a few centimetres of washi tape is an achievement.
The 8cm x 14cm tag was stencilled with 2 TH stencils and peeled paint and brushed corduroy DI. I used a Sizzix die to cut the birds into the tag and backed it with some blue card. A small piece of washi tape was added and edged with gold peel-off lines. The words are cut from a Sizzix Hunky Dory strip alphabet coloured with a brown alcohol marker as was the strip attached to the top of the tag.
Posted by Scrapmate at 07:00 No comments: 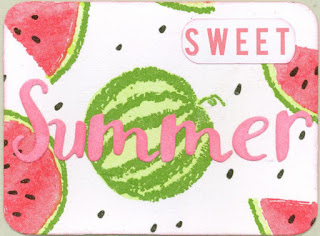 It's been a while since I posted on my blog - a lot has been going on. Despite being very careful and still wearing a mask in shops etc I managed to get Covid last month. Fortunately I don't seem to have passed it onto family or friends and spent 10 days in my own little isolation unit of bedroom and bathroom with meals and snacks left at the door. Thank God for iPads and Netflix! After a few days of doing little else but sleeping and drinking lots of fluids I felt much better and caught up on a few series that I had wanted to see. I am fully recovered now and have my sense of smell back.

I thought I'd break myself back into crafting gently with a pocket card which I haven't made in a while. This came together very quickly. The background is a serviette from a pack I had bought a few months ago for all the BBQs we were going to have in the summer (ha, ha, thanks a lot summer!). I die cut the letters for summer, coloured them with worn lipstick DI and cut the word sweet out of a book of tags. That's about it sweet and simple!

This month's theme is Sugar & Spice with pastel pink and green as colours. I remembered I had an old paper pad called Kitschy Kitchen which had the quote 'Sugar and spice and everything nice' on it so that set me off on a culinary themed tag. The gingham background is from the same paper pad and I ran it through a falling flowers embossing folder (click on the pic for a better view) before edging the quote and the tag with bundled sage DI.

The cupcakes are from a very old (2006) set called Build-a-Cupcake by Banana Frog. I stamped the components with Brilliance coffee bean, heat embossed them and then water coloured them with DIs - spun sugar, scattered straw and tea dye. I added some pink heat embossed 'sprinkles' to the larger icing.The cherries were coloured with embossing pens and heat embossed. The icing on the large cupcake and the smaller cupcake were raised on foam pads. The original cherry on the larger cake had a much bigger stalk and after sticking it down I realised it didn't look quite right so I gave it a smaller stalk and repositioned it which left a bit of an 'oops' mark on the tag which I covered up with some strategically placed sequins coloured with an alcohol marker. Some organza ribbon finished the tag. 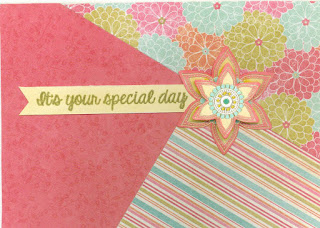 With the easing of restrictions in the UK I have been out and about a little more and popped into some charity shops for a look around.One of my finds was a Hunkydory book called Floral Flourishes. This is a 6"x 6" book of die cut floral shapes for colouring. It's quite relaxing to sit with some alcohol markers and colour a few. The card above has 2 such die cuts layered with foam and some scraps of patterned paper left over from making a mini-book. Some of the die cuts are gold foiled , some silver and some outlined in black. As the ones I used are gold outlined I embossed the sentiment in gold.

The second card is a mini slimline and uses some more coloured die cuts matted onto red and gold card which was cut with another charity shop find - a Tonic Verso shadowbox insert die set. 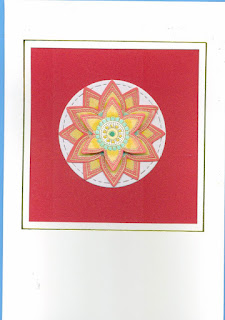 The third card uses the die-cuts in one of my last aperture card blanks. Years ago when I did crossstitch cards I used to mount them in aperture card blanks and this is one of my last ones. The floral medallion was layered with foam pads, mounted onto a stitched circle die cut and then some red card was used to fill the aperture.
You will probably see some more cards made with these die-cuts soon.

I started this blog to be able to link entries to challenges and to keep a record of things I had made. I don't do many challenges these days but I still use this blog as a reference and a reminder. You are very welcome to look around and if something inspires you please do let me know by leaving a comment.