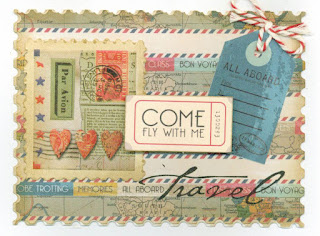 I recently tidied up my craft trolley which holds my smaller paper pads and odd sheets of patterned papers and rediscovered a Papermania 6X6 pad called All  Aboard. This prompted another travel themed pocket card. The base was cut from a Sizzix pocket card set called Butterfly Cards which gave me the serrated postage stamp effect. I added another of my 'stamps' which tied in with the theme but all the other elements were from the Papermania pad. I punched a hole and added some baker's twine to the tag and mounted the ticket on foam to raise it up. I stamped the word travel and added a little shimmer on the hearts.
Posted by Scrapmate at 07:00 No comments: 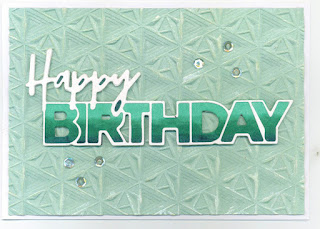 I was tempted by a die on ebay. I reasoned that it was a good basic die that would be especially useful for male cards. As soon as it arrived I had to try it out. I used the geometric 3D embossing folder for the background and rubbed it with Nuvo embellishment mousse in Mother of Pearl.

The die is made of 2 parts - the base and the outline. I decided to go for an ombré effect and used my Triblend alcohol marker pen in Jade. I stacked both parts and then added another layer at the bottom. I wanted extra dimension so decided to mount the whole piece on foam pads. It was very fiddly and I don't think I'll be doing that again! Some sequins finished the side fold card.

While I had the die out I made another card with it - this time with the True Blue Triblend marker. I used some old scrapbook paper for the background and cut the stars from a scrap of patterned paper. 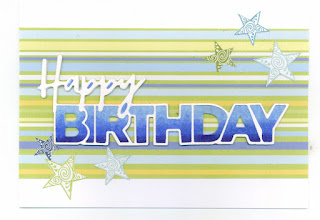 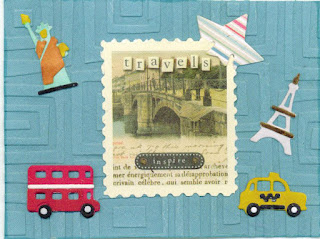 I realised that it's been a few months since I made a pocket card for my mini album of random things. I figured out that my last trip abroad was a year ago and I guess subconsciously my desire for travel prompted this card.

It uses a Sizzix die set called Tiny Travel Globe. This has a mini snow globe and tiny travel elements some of which you see here. The pieces are so tiny I found the easiest way to use all the elements was to cut them out from white card and colour the various parts as desired. So I have a London bus, a New York yellow cab, the Eiffel Tower and the Statue of Liberty I added one of the scrapbook paper 'stamps' that I have and a die cut star shaped clip from a Sizzix set called Noted.  The background is a Cuttlebug embossing folder - Traffic Jam. 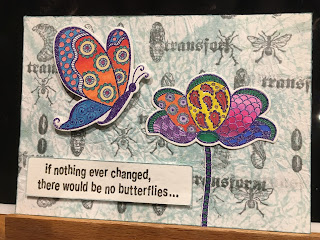 This month the letter is:

Colour options are Indigo and Ivory.

I used an Ivory base card and Indigo on the butterfly. The background was made with a piece of tissue paper which I crumpled, smoothed out and rubbed with speckled egg DI. I used an old stamp from a Katy's Corner grab bag which shows the life cycle of some sort of insect (fly? ant? I have no idea) and a text stamp by Paper Artsy with Memento gray flannel. I mounted this onto the ivory card. The butterfly and flower are from a stamp and die set by Dare 2 B Artzy called Butterfly Tangle. I stamped them both with Versamark and heat embossed with Blonde Moments sweet cool iridescent embossing powder and then coloured them in with alcohol markers. The main quotation is from Darkroom Door's Wildflowers vol 1 stamped with Versafine onyx black and clear heat embossed. Some elements were mounted on foam pads. 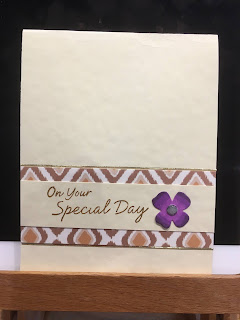 Usually I'm all about simple cards - much as I like seeing them I'm not really into making technically fiddly cards. However with things the way they are at the moment I've been occupying myself with things I have that I had previously put aside as being 'too fiddly'. The Altenew layering stamp that I used in a previous post was one thing and the Card in a Box was another.

I bought a Pop-up Die set by Stampendous a couple of years ago in a sale. There were co-ordinating stamp sets which were not available at the time but I thought the dies might come in handy one day. That day finally arrived! I was trawling through Pinterest searching for something when I found instructions for using the die set. I dug the set out and had a play - I have a friend's birthday coming up so made it with that in mind.

The front is very CAS as you can see above. Inside is... 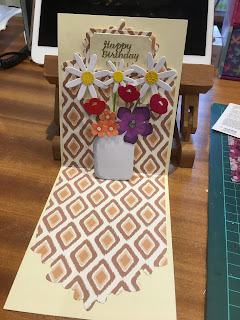 The instructions were very clear and now I've made it once I have a better idea of how the pop-up mechanism works. The edging die I used to cut the fancy top and bottom was included in the set as was a set of small nesting ovals and labels which I've used for the sentiment at the top and I have another in cream card to stick on the bottom half for us to sign. The patterned paper is from DCWV Serenity Stack. I used a Sizzix set called Garden Florals for the jar and the flowers which I coloured in with alcohol markers. The orange flowers were made with a punch. I'm not the greatest flower arranger but I'm happy with the way it looks (yes I realise that if it was a proper glass jar the stalks would show through but let's pretend it's a white opaque jar). You can see the dimension more clearly below: 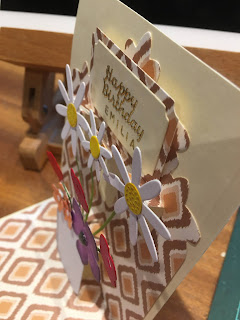 The beauty of it is if the flowers are attached correctly it all folds flat to fit in an envelope. 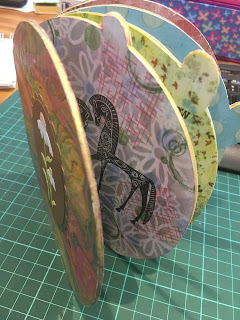 On one of the lower strata of my Pile of Shame I discovered a project I had started a long time ago. I had bought an old children's board book from a charity shop (I think it was farm animals) and had started working on it but it had disappeared over time and lay unfinished on my desk. I rediscovered it during my recent desk tidy-up and it went into my ziplock bag of items to be dealt with.

I had covered and decorated most of the pages so it didn't take long to complete. It's a random collection with no particular theme but I have enjoyed finishing it with bits and pieces from the ziplock bag and some washi tape. Here's a quick run-through of the pages:

Posted by Scrapmate at 12:58 No comments:

Tackling the Pile of Shame! 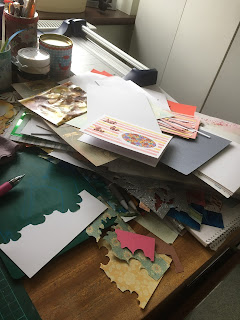 My desk has long been a source of shame and I've been meaning to have a tidy up and get rid of all the little bits and pieces that I seem to collect. A post on one of the forums I visit about tidying up finally gave me the push that I needed to do something. 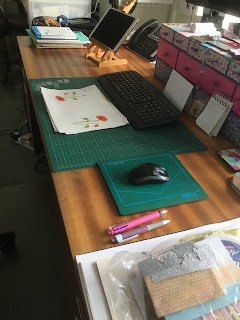 Everything got cleaned, my cutting mat got sanitised and switched around (I always cut in the right hand corner and it was showing signs of wear). 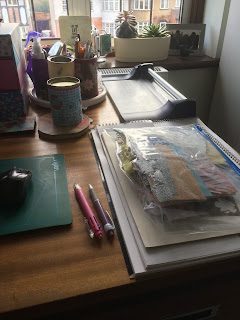 The pile of shame is now a ziplock of bits and pieces and WIPs (works in progress). The end result is very satisfying and has made me contemplate sorting out a few more sections of my room (soon).

I started this blog to be able to link entries to challenges and to keep a record of things I had made. I don't do many challenges these days but I still use this blog as a reference and a reminder. You are very welcome to look around and if something inspires you please do let me know by leaving a comment.